Ready for Swing-by! BepiColombo Will Pass Close to the Earth on April 10 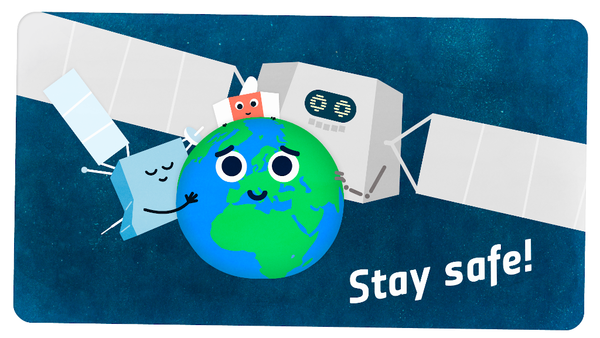 MIO, MPO and MTM that form BepiColombo wish us all the very best as they fly-by the Earth (credit: ESA).

On April 10, JAXA's MIO Mercury orbiter will swing-by the Earth onboard the BepiColombo spacecraft. As the spacecraft receives a tug from the Earth's gravity to assist the journey to Mercury, MIO will be testing its instruments on our planet's magnetic field.

At the end of last week, MIO completed a major health check that confirmed the probe and the onboard instruments were all operating normally since launch. MIO is now ready for swing-by observations!

The BepiColombo mission is a joint endeavour between ESA and JAXA to explore the planet Mercury. Each space agency designed an orbiter which stack together with the European-built transfer module that provides the propulsion through interplanetary space. The three components form the composite BepiColombo spacecraft that launched on October 18, 2018. The trio also have their own individual twitter accounts to follow:

Mercury's close proximity to the Sun makes entering the planet's orbit a challenging feat. The strong gravitational pull from the Sun risks accelerating the spacecraft past the planet and into a fiery demise. To counter this, BepiColombo will perform a total of nine planetary swing-bys in which the spacecraft passes close to the Earth, Venus and Mercury and uses their gravity as a break to resist the Sun's pull.

Animation of BepiColombo's seven year journey to Mercury, with the help of the gravity from Earth, Venus and Mercury to adjust its trajectory (credit: ESA).

18 months after launch, the first of these swing-bys is about to occur. BepiColombo will pass by the Earth on April 10, 2020, reaching its lowest altitude of 12,600km over the South Atlantic at 13:25 JST (04:25 UTC). While the spacecraft will not be visible to the naked eye, it may be possible to spot with a telescope if local conditions are good (maximum apparent magnitude is estimated at about m = 8).

The JAXA orbiter, MIO, is designed to investigate Mercury's magnetic field, so the fly-by with Earth provides an opportunity to try the probe's instruments with the only other rocky planet in our Solar System that also generates a magnetic field.

"For MIO, it's the main goal of the fly-by!" says MIO project scientist, Go Murakami. "We can calibrate and evaluate the performance of MIO's instruments with the well-known Earth magnetosphere."

MIO is travelling to Mercury tucked within a protective sunshield on BepiColombo. While this limits the field of view, MIO's Mercury Plasma Particle Experiment (MPPE) that senses charged particles can still see out of the top of the sunshield, and the magnetometers (MGF and PWI instruments) can also function. Once at Mercury, MIO will extend wire antennas to also measure the planet's electric field, but these are stored during the cruise through interplanetary space. 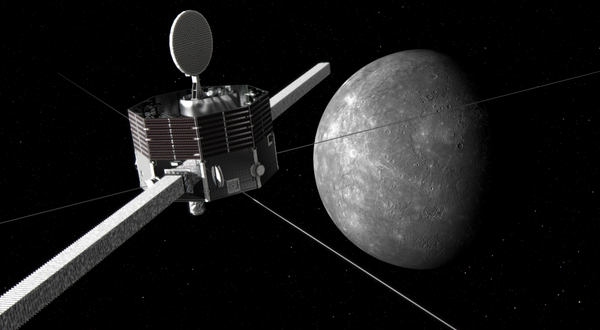 MIO's instruments are designed to measure the weak magnetic field of Mercury, which is just 1% of the Earth. At the spacecraft's closest approach, the strength of Earth's magnetic field will therefore be outside the dynamic range of the MGF magnetometer, but will be measurable at further distances.

Since launch, MIO has undergone a series of checks to ensure the probe and the onboard instruments are operating as expected. Confirmation is a slow business, as it cannot be done during use of the electrical propulsion (ion) engines. Outgassing also occurs after launch, where trapped or absorbed gases are released from the spacecraft material once in the vacuum of space. It takes several months before this discharge is complete, during which time the instruments need to remain protected against the contaminants.

The last batch of tests that form MIO's post-launch checkout were therefore only completed last week on March 27. The probe and science instruments have all been found to be operating normally, in addition to the lock-release mechanism that will allow the mast and antennae to be deployed at Mercury.

This week also marked a major change for the MIO project team as Project Manager, Professor Hajime Hayakawa, retired on March 31. Hayakawa has been a core member of JAXA's plan to send a spacecraft to Mercury for over 20 years, starting when the Mercury Exploration Working Group was formed in June 1997. This became a joint mission with ESA in September 2000 and the idea for BepiColombo was born. Professor Hiroyuki Ogawa will take over at Project Manager for MIO this month as the whole team watch the spacecraft turn away from the Earth and head towards Mercury.

After the Earth swing-by, BepiColombo will perform two Venus swing-bys, with the first planned for October 2020. Unlike the Earth and Mercury, Venus does not generate its own magnetic field. However, the planet has an induced magnetosphere (region where a magnetic field can be felt), created from the interaction between charged particles in the solar wind and those in the upper part of the Venusian atmosphere.

MIO's examination of this system will provide important data on how a planet's atmosphere and surface can be protected from the high energy particles of its star.

BepiColombo is due to enter Mercury's orbit in December 2025. But before then, there is plenty of science to be done in the upcoming 9 swing-bys.

[an error occurred while processing this directive]